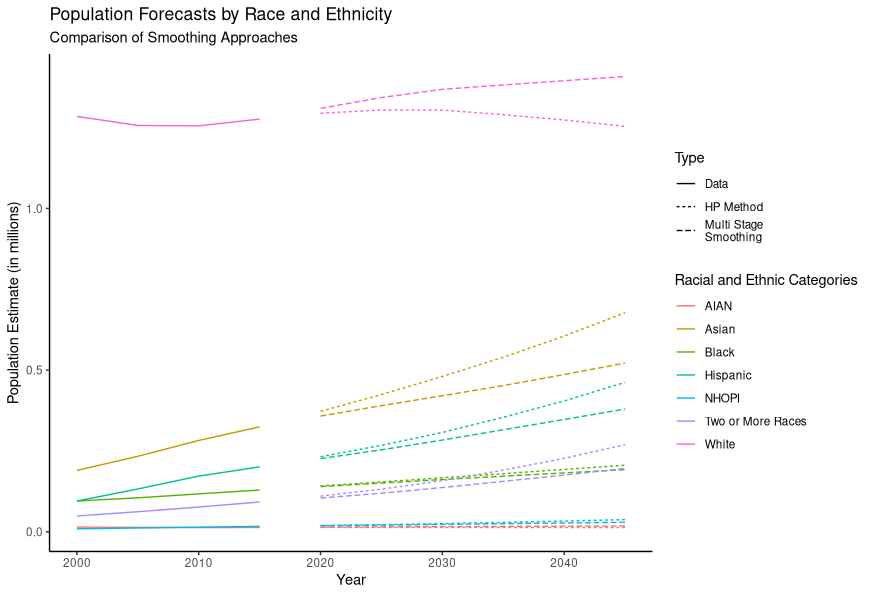 The U.S. has experienced several notable demographic changes in recent decades, including rapid aging and diversifying of the general population. These changes can be especially impactful at the local level, such as within a county, city, or even neighborhood, impacting policy and planning decisions regarding where to locate new housing, healthcare resources, childcare facilities, and more. While demographic forecasting methods, such as the cohort component method, give us an analytical tool to prepare for future population changes, data limitations often prohibit these methods from being applied at the local level where local government policies are directed. Furthermore, issues with small numbers of populations in local areas often can lead to traditional estimates producing unreasonable forecasts with extreme population growth or decline.  We outline a method for making localized, henceforth referred to as small area, projections of populations by detailed groups in the absence of traditional data requirements necessary for projections. We then apply this method to the population of King County, Washington to make projections to 2045 by Age, Sex, Race and Ethnicity for all census tracts in the county.

The most well known method used for demographic projections for populations that have adequate vital registration systems is the cohort component method (CCM).  The CCM requires age- and sex- specific data about fertility, mortality, and net migration for the population of interest. Using this data, age-specific fertility, mortality, and migration rates are estimated and applied to the most recently observed population to estimate population size for future time periods. This method has been used by many agencies in the US to build baseline forecasts of what future populations may look like (Inoue 2017; Swanson et al. 2010). While often used to make projections in larger areas, this method is insufficient at smaller areas for two reasons.

First, data on fertility, mortality, and migration in the United States are often not available at small area designations. Most national vital reporting agencies, such as the Center for Disease Controls Wide-ranging Online Data for Epidemiologic Research, only report vital statistics data on births and deaths for counties at the most granular level. Migration data is even more elusive with the Census reporting limited detailed information on county-to-county flows. While some local governments produce more detailed estimates of this demographic data, they are rare.

Second, traditional methods of estimating underlying mortality, fertility and migration rates are susceptible to large amounts of error when populations are small, which is more common for small area estimates. For example, a single year with a few more deaths than average can result in wildly different annual mortality rates across time which may lead to population projections that are insensibly small if we expect that year to be an outlier. The same possibility is true for migration and fertility rates and can become more common when populations are broken down even further such as by race and/or ethnicity.

The CCR captures the change in the size of a given population over the course of the time period being examined, and thereby proxies for age-specific population change arising from survival and in-migration, net of mortality and out-migration. The CCR can be calculated for various geographic levels and can be calculated separately by sex, race and ethnicity, and other demographic characteristics. When we divide the population into 5-year age groups, the CCR for age group x to x+5 between 5-year periods T0 and T1 is calculated as

The CWR proxies for fertility by measuring the ratio of the child population to the population of women of childbearing age (between 15-44). The CWR is calculated separately for male and female children to account for the empirical sex ratio at birth and differential infant mortality rates (Parazzini et al. 1998). The two ratios are then multiplied by the size of the population of women of childbearing age to obtain an estimated number of children aged 0-4. The general form of the CWR equations can be found in the Equations (3) and (4) below. The left-hand side of each set of equations represents the calculation of the CWR used to proxy for fertility rates for female and male infants respectively. Rearranging these expressions in Equations (3) and (4), we demonstrate how the CWR is then used to create projections of the female and male infant and child population (FP and MP).

The HP method deals with data limitation concerns but not issues caused by small population numbers. To mitigate issues of unreasonable growth in geographies with small, rapidly growing populations, we implement a multi-stage smoothing process to produce our CCRs and CWRs. This smoothing process is a variant of a smoothing method originally applied to small area forecasts in Japanese prefectures (Inoue 2017). To implement the smoothing process, we produce our tract-level population forecasts incrementally: first we compute county-level projections, then we create county-level projections by race and ethnicity smoothed to the overall projected county population size. Then, we create our tract-level projections and smooth them to the pre-smoothed race- and ethnicity-specific projected estimates of the county population size. Performing this multi-stage smoothing method is necessary in constructing tract-level projections as the population sizes of different census tracts can vary greatly. Moreover, the age, sex, and race and ethnicity distribution can be drastically different in one tract compared to another. These differences in distribution can be further compounded by racial and ethnic subpopulations residing in clusters in certain parts of the county. Our multi-step smoothing process takes into account these differential distributions, helping create more accurate small-area estimates. For more mathematical details on this smoothing approach see here.

We demonstrate the effect of using a smoothing method by making tract-level projections in King County Washington by age, sex, race, and ethnicity. To make our projections we use population estimate data from 2010 and 2015 from the Washington state Office of Finance and Management. In order to show the impact of smoothing versus a traditional projection method we make projections using a traditional HP approach as well as our multi-step smoothing approach.

This method may be applied to any population as long as age and sex specific data is available and there are a number of ways which smoothing may be applied. To make it easier to use this method, our team has created an R library to apply this method for other projections.

Swanson, D.A., Schlottmann, A., & Schmidt, B. (2010). Forecasting the population of census tracts by age and sex: An example of the Hamilton-Perry method in action. Population Research and Policy Review, 29(1), 47-63.

All code necessary to implement the methods and reproduce the figures and results in A new method for detailed small area projections has been archived as of publication on November 3, 2021 by the Population Dynamics Lab here: UW PopLab Github.